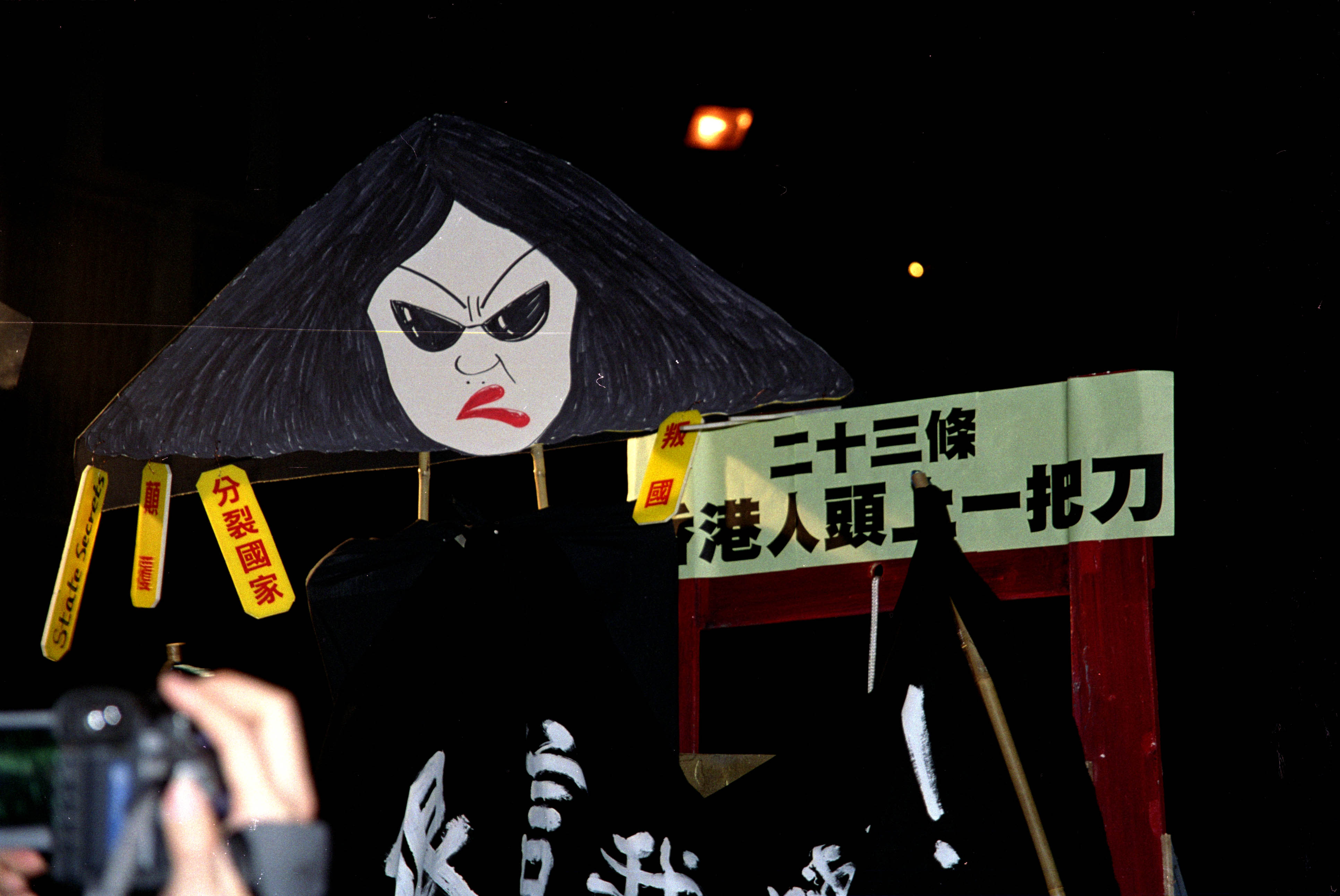 Everyone loves to say “politics is the art of compromise”, which cannot be more wrong: if politics is only about compromises, then why do we need still the word “politics”? Shouldn’t the word “compromise” have replaced “politics” already? Isn’t it better to just change the Chinese communist’s “Political Consultative Conference” to “Compromising Consultative Conference” instead? Why not change the subject “Political Science” in university to “Compromising Science”?

Politics fundamentally is about having clear boundaries. Any deviation from this truth only leads to generations of enslavement. A constitution defines the extent of a government’s powers, a federation sets out each state’s area of autonomy, and the job of the opposition party is of course to supervise the governing party. All these come from having proper boundaries regarding interests, powers, territories, peoples and ideologies. Without boundaries there can neither be politics nor society.

The fall of Hong Kong is a result of boundaries in disrepair, ideological confusion, failure to distinguish friends from foe, and having guests that have usurped the host. The Trojan Horse has kept invading, while many Hong Kongers continue to side with a totalitarian regime.

The 90s: The Full Name of “Pro-Democracy Camp” Should have Been “Pro-Democratic Reunion Camp”

Through the way a party or faction is named, one can see how political boundaries are blurred. There is this group of politicians that has received votes from more than 100,000 people, who claimed they cast their votes while “having tears of regret”. This group has changed its name numerous times, but the names chosen are all just smoke and mirrors that do not reflect what this group truly represents. In the 90s, this party called itself “the pro-democracy camp” and the entire Hong Kong society believed them, as it was a time when everyone passionately hated the Chinese Communist Party for the Tiananmen Massacre and this party seized the opportunity to rise. However, hidden within the words “pro-democracy camp” was “democratic reunion”, as they really styled themselves as the “democratic reunion camp”. In fact, these people have always been pro-China nationalists that advocated China’s takeover of Hong Kong.

The Turn of the Millennium: “Pan-Democrats” is really “The Pan-Universal-Suffrage Mercantile Party”

During the turn of the millennium, these people changed their names once again by attaching a prefix “pan“ to the label “democrats”. They assembled a new coterie, promoting the LegCo and Chief Executive universal suffrage (nicknamed “Dual Suffrage”) as a common political platform, in response to the rise of the radical, progressive League of Social Democrats. Their way of distinguishing themselves somehow received support from the Hong Kong public yet again, as Article 23 was being legislated at the time. In fact, any party that appeared in the First of July protest march and did not fervently support Article 23 would have been “the good guys” in the eyes of the general public.

Yet, no one seems to remember that within this clique of “pan-democrats”, not everyone was against the legislation of Article 23. The Civic Party, for instance, was not truly against Article 23. They only wanted the SAR regime to provide adequate consultation before pushing forth the legislation, calling it a “constitutional responsibility”. How could you call yourself “a believer of democracy” when you wanted the government to do its “due diligence” and to ensure “procedural justice” in its effort to restrict Hong Kong’s autonomy and our personal freedoms in the name of “national security”? Maybe the Civic Party should cross out “civic” in its name and rename itself as the “Chinese Pro-Law Party”. As for the “pan-democrats”, no matter how inclusive they think they are, should have avoided this “Chinese Pro-Law Party” like the plague.

Likewise, in this coterie that is the “pan-democratic reunion” camp, every political party has its own completely different economic ideologies. The Democratic Party and Civic Party endorsed the privatisation of shopping malls, markets and car parks at public housing estates, as well as the abolition of rent control. The Civic Party also voted to support giving lump sum grants to welfare organisations. These so-called “democratic” parties pledged their support to business conglomerates’ and the Hong Kong government’s efforts to deprive grassroot Hong Kongers of their living space. Even if they support universal suffrage, can they still proclaim themselves as “democrats”? If they have to come up with a name that truly corresponds to their core beliefs, they will have to take away “democratic” but may be keeping “universal suffrage”, while adding the word “mercantile” – they should have been called the “Pan-Universal-Suffrage Mercantile Party”.

Let’s not forget that the League of Social Democrats advocates for social democracy and is therefore a left-wing group, making it totally incompatible with the aforementioned parties. Of course that’s assuming that they take their ideological platform seriously.

2010: Giving up “Universal Suffrage” to Become the “Pan-Opposition Mercantile Party”
A second schism occurred within this coterie during the second round of political reform in 2010, whereby members of the Democratic Party and others went to liaise with Communist China’s Liaison Office (LOCPG) in Hong Kong, and subsequently betrayed their election promise by supporting the expansion of Functional Constituencies as well as a plan for “political reform” that did not have a clear timeline for instituting universal suffrage in Hong Kong. It would be embarrassing for this coterie to keep “universal suffrage” in their name. When “universal suffrage” was taken out of their title “Pan-Universal-Suffrage Mercantile Party”, all there was left was “pan-“ and “mercantile”. Nonetheless, these people loved to pay lip service to “universal values” such as human rights and the rule of law, as well as expressing their opposition. It would therefore be appropriate to call them the “Pan-Opposition Mercantile Party”.

When China tightened its clamp on Hong Kong, this coterie voted in support of the construction of the Hong Kong-Zhuhai-Macau Bridge and the preliminary appropriation for the Guangzhou-Shenzhen-Hong Kong Express Rail Link. They supported the National Education Curriculum (the so-called “Patriot Education Curriculum”) to become an independent, stand-alone school subject. They even supported the abolition of the policy forbidding Chinese immigrants from applying for public housing and welfare until they have fulfilled the 7-year residency requirement. All these years they managed to keep their support for “reunion with China” from the view of the Hong Kong public, and even denied that they had ever advocated for a “democratic reunion with China”. Finally, at this crucial juncture where China attempted to take over Hong Kong for the second time, this coterie’s true self emerged. They sold out Hong Kong’s interests, colluded with business cartels, and became China’s shill. At this point, they should have been called the “Pan-Opposition Chinese Mercantile Party”.

At this point, it is clear that the “Pan-Opposition Chinese Mercantile Party” is just a nonsensical mixed bag of confusing ideologies. After 2016, there came a sudden rise of the impassioned “self-determination” and “Hong Kong independence” camps, along with the so-called “moderate localists” that were perennially irrelevant, and certain up-and-coming politicians who called for “ordinary happiness” to solicit votes. Thus the term “Non-Establishment Faction” appeared.

If a party calls itself “pro-establishment”, being pro-government from start to finish is of course the norm. We expect a “pro-establishment” party to receive sponsorship, cultivation, command and direction to allocate ballots directly and regularly from the totalitarian regime. If we look at the flip side of the coin, the “non-establishment”, all it means is that it is not pro-government from start to finish, or that it is not under the command of Communist China on a regular basis. This then exposes the true nature of this coterie: while they’re not directly related to the pro-establishment system, it does not mean that they cannot collude with the establishment or business cartels outside of the “pro-establishment” system. So when Ivan Choy, the news commentator, suggested that the “Non-Establishment Faction” should have called themselves the “Opposition”, he couldn’t have been more wrong.

This camp of people went from the “Pro-Democratic Reunion Camp” to the “Pan-Universal-Suffrage Mercantile Party”, “Pan-Opposition Chinese Mercantile Party”, and finally “Pan-Opposition Chinese Mercantile Party”. While they remain at the fringe of the pro-establishment system, they always side with the establishment and business conglomerates at crucial times.  The only difference is that they would express their “opposition”: during urban redevelopments, they would urge the Urban Renewal Authority to properly resettle residents in the area. When Link REIT increases the rent, they would urge business cartels to be mindful of their “social responsibilities”. When the National Education Curriculum was going to be made into an stand-alone school subject, they would ask that human rights issues be incorporated into it. When the Guangzhou-Shenzhen-Hong Kong Express Rail Link was already fully built and the decision to have joint checkpoint was approved, they then asked for a flexible limit on passengers’ amount of luggage. This is the only room the totalitarian regime had allowed for any “opposition”. To express “opposition” is to express an opinion that is not identical to the government’s view. Such opposition is trivial and makes no difference to the grand scheme of things. Just as they have been MIA when voting time comes during these recent years, and just as they had lost the recent West Kowloon Legislative Council By-election, voters also agree that their opposition makes no difference whatsoever.

Somehow these people always lose their fight during any political conflict, as if they are right on cue, but at the same time they know that they should raise the June Fourth Vigil candle with their right hand and the yellow umbrella with their left. In front of the public, they know that they need to chant that they are steadfast on Issue A, they protest against Issue B, they oppose C, and they denounce D. This sort of “opposition” is exactly what the Hong Kong SAR regime needs, in order to maintain a thin veil of “dissent” and avoid having every bill being unanimously passed, and to prevent the pro-establishment camp from winning every single seat in the house without a “fight”, thereby turning the LegCo into yet another Chinese National People’s Congress. This would have dealt a blow to international investors’ confidence, damaged Hong Kong’s international image, and become the leverage the United States might seize to intervene.

Accurately speaking, these “dissenters” that assist the pro-establishment whilst being outside of the said system should be renamed the “Pro-Establishment Opposition”. Therefore, there is no point questioning why Hong Kong voters no longer go to the ballot, and let’s not waste time thinking how “making friends with so and so” would this and that happen.