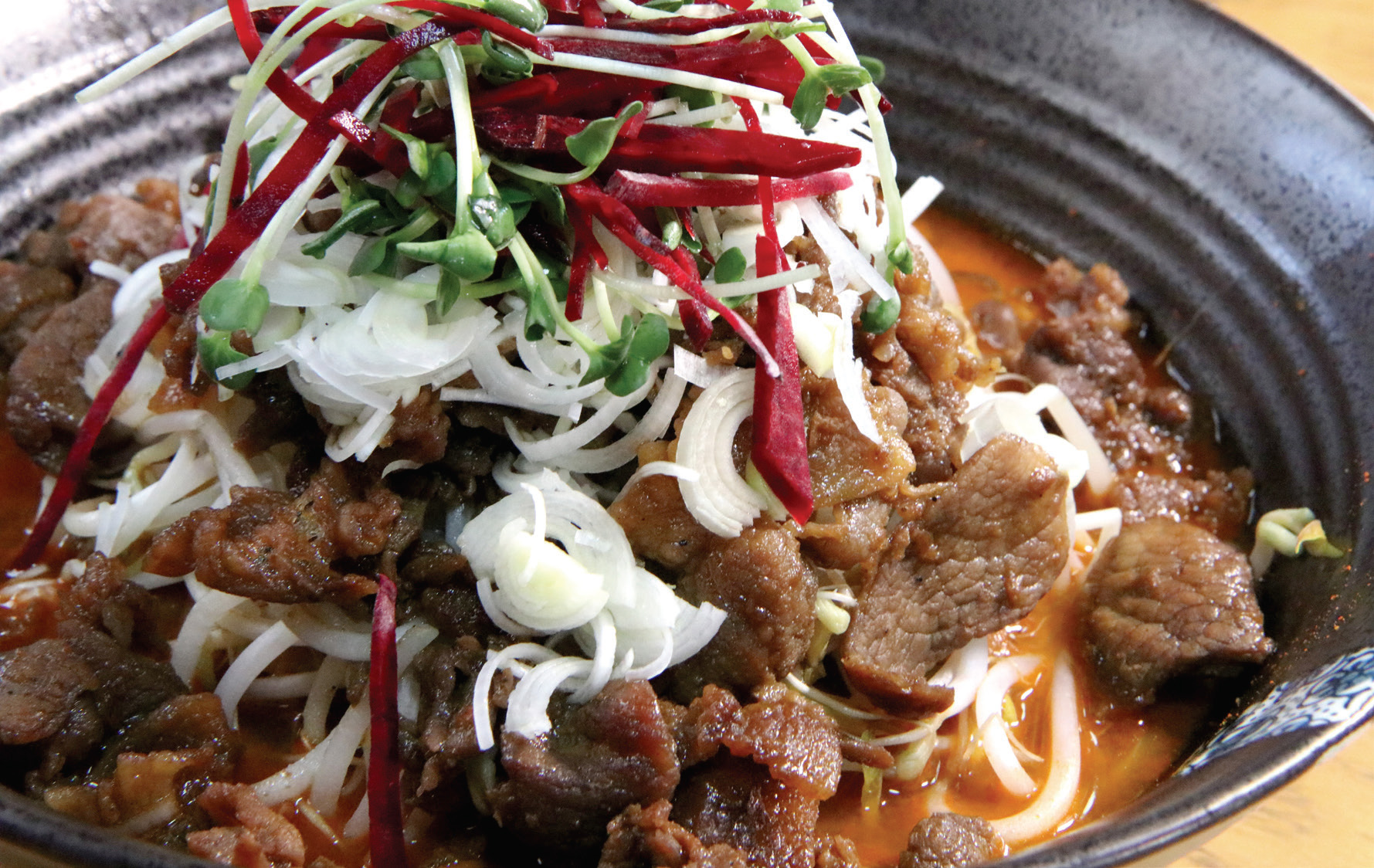 Since 1997, it’s difficult not to lament at seeing the younger generation thinking that hot-sour mixian rice noodles is authentic Hong Kong food.

Traditional Yunnan mixian rice noodles is cooked in a light broth, with ingredients such as delicacies from the mountains, wild fungi and herbs added; upon arriving in Hong Kong, it has been turned into something like cart noodles, with hot and sour soup found in dislocated Sichuan restaurants as the soup base. Looking at that bowl of mixian rice noodles in the advertisement, one witnessed “orange trees north of River Hwai bears trifoliate oranges”, and it is Hong Kong that permitted clear-broth mixian rice noodles being transformed like this, and trending at that.

When I was little, back during the 60’s last century, cart noodles weren’t considered popular and neither was spicy fish balls. Fish balls were lightly flavoured, and as for wonton noodles, which is wontons and thin noodles served in a clear broth, they were all just snack food and unrefined. One will never say, “Oh, Wonton Noodles and BBQ Pork Rice are authentic Hong Kong food!” They are just street-side comfort food, not cuisine. Back in those days, majority of people’s lives were hard, Cantonese and Shanghainese cuisine were popular, and the poor knew what delicacies were. Therefore, restaurant advertisements didn’t say “tasty food”, instead they say “sumptuous food and fine wine”, “exotic ingredients from the mountains and seas”, “numerous kinds of delicacies” and “a feast created by skilful hands”. Smaller diners would write things such as “specialty dishes”, “barbecued over an open flame” and “seasonal dishes”.

Recently, with traditional Chinese food diners and eateries having been beaten back by this faux pandemic, South-western Chinese mixian rice noodles can be found everywhere. Food needs to be able to showcase their various flavours – congee, rice noodles, noodles and rice all have their flavours – in order to be cooked well without having it being overwhelmed; it must be served hot, so that the dish’s fragrance can flow out and warm to the palate (with summer dishes such as cold noodles and sheet jelly being the exception). Due to noodles being able to be easily fused with flavours from meats and vegetables, such flavours cannot intermingle to the point of overwhelming the taste of the noodles itself, and so the soup base has to be bland. Lai Fun noodles can only be paired with roast duck or roasted goose meat, and as for rice noodles, mixian rice noodles and such, they has to be paired with a light broth with an unadulterated flavour.

To put pig ears, black wood ear fungus, sausages, soy sauce chicken wings and such together with mixian rice noodles, then to lay hot and sour sauce, is a sin committed in recent China; for it to be trending in post-1997 Hong Kong, it is self-humiliation for Hong Kongers! Why bother talking about opposing communism, when dissemination of food meant for migrant workers in Shenzhen, is enough to overcome the people of Hong Kong? For those Hong Kong youths, in their never-tiring taste for this distasteful dish for mainland Chinese migrant workers, to go opposing the communists and proclaim Hong Kong independence? It is apparent to those with even a minute understanding of politics that it would not end well.

Authentic local food has to be cultivated, and so classical literature too has to be refined, and not from grandstanding. The French novelist Marcel Proust, in his novel Remembering of Things Past, described madeleines in the following:

Many years had elapsed during which nothing of Combray had any existence for me, save what was comprised in the theatre and the drama of my going to bed there, One day in winter, probably because it was cold, my mother offered me some tea and some humble madeleines. I declined at first, and then, for no particular reason, changed my mind… And suddenly the memory returns. The taste was that of the little crumb of madeleine which on Sunday mornings at Combray, when I went to say good day to my aunt in her room, she used to give me, dipping it first in her own cup of real or of lime-flower tea…the forms of things, including that of the little scallop-shell of pastry, so richly sensual under its severe, religious folds...

The novel isn’t telling one how to make madeleines, but about sensation. Madeleines are traditional small cakes from the Lorraine region in France. They can be long or round, but most often has a shell-like shape, with finely ground nuts added into it – usually almond – as well as lemon zest, which gives it a lemony taste. In train stations at Commercy, there would usually be women around carrying wicker baskets, and after the train pulls into the station, passengers would alight one after another, looking for some madeleines.


Food for the LOWER CLASSES and beggars

Traditional Chinese cooking pays much attention to unadulterated flavours and their harmony thereof. By unadulterated flavours means that the ingredients cannot be variegated; even if it’s just cart noodles, to have salted-vegetables, fish balls and squid tentacles is already overly multifarious, but at least one can still make out its pure salty and savoury taste. However, to add in pork, sausages and soya sauce chicken wings as well, is conflating incongruous foodstuff together onto the dish simply because one is a glutton but has ran out of crockery to hold it all.

For food to be pure in flavour, one must have something like a large table, ample crockery, a lot of servants, with one table being able to hold eight plates and twelve dishes. To use one soup bowl for a smorgasbord-style noodle or rice vermicelli is an indication of a place lacking in size, crockery and service – resultant of high rental prices and an ever-shrinking shop capacity, coupled with their customers’ decline in taste, which Hong Kong eateries have had to face in recent years.

In addition to being pure in flavour, there is also harmony in flavours. Harmony in flavours is using multiple ingredients, with clear differentiation between which one is the primary and which is auxiliary, for stir-fry, steam and other methods, so that their flavours are balanced. Some examples are home-cooked Cantonese dishes such as scrambled-eggs with shrimp and hotbed chives, steamed chicken with shiitake mushrooms and cloud-ear fungus, and steamed spare ribs with black bean sauce. Some dishes would also have some slightly-sweetened starch mixture added onto them (known as thickening), so that moisture secreted from vegetables are captured and deep-fried grouper fish-balls not so scalding to the mouth. Dipping food in sauces can also harmonise flavours, but it cannot increase or add on flavour. One may add a little sweet soya sauce to fried rice flour rolls found in dim-sum at Cantonese restaurants, but one should not dip it in this recently invented, a bastard of a sauce – XO Sauce – as it increases flavour, cover over flavours, and not seasoning.

If it went beyond being pure in flavour and harmony in flavours, then the sauces are not about seasoning but adding flavours which contradict each other; to have the soup being sour and spicy, one can view it as food to satisfy those of the lower classes, or those for beggars and the poor out on the streets that would heap various leftovers onto their bowl, and cannot be viewed as the locale’s signature dish. For the white-collars in Hong Kong who earns tens of thousands a month in salary, to be seen holding a bowl or a plate of food meant for beggars during their lunch hour at Central and Wan Chai, one would come to understand just whence their tens of thousands of dollars in salary came from and whence it went. They devote themselves to their jobs or studies, their entire state-of-mind only about working themselves to the bone for their employers, with more than half of their salary going into their mortgage, how can they be in the mood to think about food and eating well?