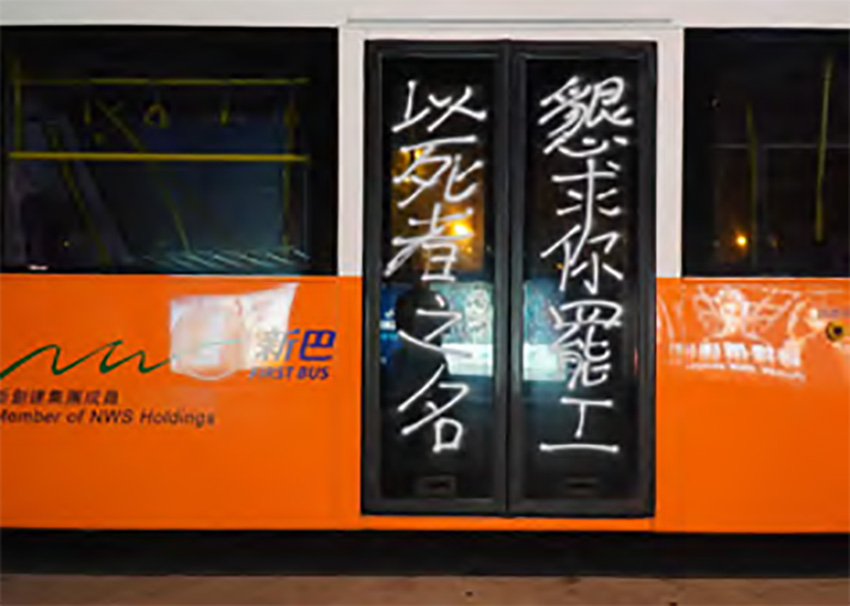 The number of protesters arrested during the Constitutional Protection Movement [in Hong Kong] up until 16th December, 2019, was 6105 people. On the 15th of October, Chief Secretary Matthew Cheung said that more than 100 of those arrested were under the age of ten. The Pan-Democrats elevated children as idols of worship and the Pseudo-HK Independence rabble obeyed their command, inciting kids and young people to participate in unnecessary militant resistance that resulted in them being arrested, abused inside the yamen, even ending up as naked corpses floating in the waters. And afterwards, on 25th November, 2019, the Pan-Democrats channelled protesters into being fully involved in the District Council elections, and with the Pro-Establishment defence of their masters having proven to be inadequate, the former gained seats [in various district councils]. Now there is a voice calling for an assault on the Legislative Council’s Functional Constituencies, drowning out the call to fight for universal suffrage for both the legislature and the executive arms of government; the Pan-Democrats had sacrificed children and youths in order to use them as “human pilings” for their seats at the legislature.

On the morning of 1st of December in Guangzhou, three people were buried alive in a sinkhole that had caused the road to suddenly collapse. The local authorities refused to rescue the victims; instead, they quickly filled the hole with concrete, saying that it was to prevent further collapse of the road’s subgrade, dashing any hopes of saving those three lives. News of this incident have carried on to this day, but unfortunately no one have pointed out that this is actually witchcraft, known as a “human piling”. It is indeed an atrocious act, but it is said that the spirits of those who died unjustly can stop the roadbed from collapsing, or as the saying goes “Thousands of sails pass by the sunken boat. Ten thousand trees compete in spring before a sick tree.” Once the China-United States trade agreement is done and the money starts pouring into Hong Kong on its own, everything that has happened in this year and the last will be little more than a memory lost in the sands of time, just like the aforementioned three lives lost during a road collapse in Guangzhou, which the government quickly covered up; for it’s not easy to come by that someone else helped with procuring the “human pilings” needed to ensure the stability of the road bed.

The practice of “human pilings” is actually sorcery used in construction in ancient China, whereby craftsman in fearing that the building process will offend the local spirits and divinities and bring misfortune on oneself, would offer up sacrifices to ensure their own safety. Such sacrifices would entail the use of blood from a freshly killed chicken, but for grander undertakings living human sacrifices would be involved. Located in the ancient ruins from the Spring and Autumn Period located in Zhengzhou, Henan, a human infant’s skeleton was discovered at one level belong to the Erlitou Culture Period, suspected to be the victim of this practice.

According to the research of Leung Po-Lung, expert in the history of Hong Kong’s labour movement, there were talks of offering human sacrifices during the construction of the Tai Tam Reservoir on Hong Kong Island more than a century ago, which was republished by Shen Pao in Shanghai. In May, 1886, a rumour was being spread in Hong Kong that the constabulary had kidnapped girls and boys to be used as sacrifice for pacify the spirits and gods as the Tai Tam Reservoir and railway construction works were reaching completion. Local residents were in a panic and students at a privately-operated school were afraid of going to classes. When residents began to gather on the streets discussing the matter, constables came to disperse them waving their batons, angering the resentful crowd, whereupon some even tried to stone the officers. Some of the rocks had hit them on the head, leaving their faces bloodied; local shops were forced to close amidst the commotion. The constables went back to the headquarters to make their report and their superiors ordered more reinforcements to suppress the civil unrest.
At the time, some busybodies having tea at the Apricot Blossom Tea House (Heng Fa Lau), Possession Point in Sheung Wan had been gossiping about this, saying that the government needed 108 boys and girls as “human pilings”, to which an inspector of Chinese descent who was there at the time denounced such talk as utter nonsense. The two argued fiercely, whereupon the gossiper made an even more exaggerated claim, saying that he personally witnessed some constables capturing three kids on the 22th that same month, while another five had also been caught earlier that day. The inspector got fed up and had the two gossipers taken down to the station and charged with spreading malicious rumours, for which the magistrate fined one with $20, which was a huge amount at the time. The man claimed that he doesn’t have the means to pay the fine, so the magistrate amended the sentence to one month imprisonment with hard labour and subjected to six hours of perp-walk; the other person, fined $10, also declared that he didn’t have the means to pay, so his sentence was amended to fourteen days imprisonment with hard labour and subjected to three hours of perp-walk, as a warning to would-be offenders.

The authorities assigned people to explain the matter to the public to allay rumours and keep the peace, saying that the truth of the matter is that the tunnels leading to the fortress and Tai Tam Reservoir constructions were very narrow and only children could access them, so they were sent in with concrete to reinforce the said tunnels. Child labour has yet to be outlawed at the time, so many were employed in such dangerous work. Afterwards, Colonial Secretary of Hong Kong James Stewart Lockhart issued public notices in regards to this –

In light of certain troublemakers spreading malicious rumours in recent days, alleging to the cruel treatment of small children, residents should stop listening to such foolishness lest lunacy befalls upon you. The authorities have already issued strict orders to the bailiffs to search and investigate intensely, that should any such gossipmongers be found, they are to immediately take such people into custody and to be punished without relent. Everyone should be on guard, be aware and not make light of this. Take heed.


The most interesting part of this public notice is the use of the word “baliff” in reference to the police, which has quite an air of Chinese traditions of old. “Human pilings” is witchcraft, and since human constructions interfere with nature and thus anger the spirits and deities of the land, thus one can only use the most valuable thing to the future of humanity, children, to be offered as sacrifice to appease the spirits and gods, so that they will not harm people. Naturally, the children being offered is merely a symbolic few, and more likely than not captured from somewhere else and not one’s own. Therefore, such sorcery entails a measure of deception by trying to mislead the spiritual world, rather than an actual exchange. Founded upon fear, and offering other people’s offspring for one’s profit by deceive the gods – that is the intention of the practice of “human pilings”. Is that not also the “initial intentions” of so many politicians?