The one scene from the protest on 2nd November, 2019 that caught the most attention was the one in Central, where a lone fire-fighter was jostled around by a number of riot police. Both the Police and the Fire Services Departments issued a joint statement around the wee hours of the morning, saying that one shot of tear gas was fired at a fire truck by mistake, the fire-fighter driving was forced out of the vehicle by the gas that has entered the cabin, who then immediately alighted the vehicle to direct his discontent at the cops who were on-duty near the fire truck at the time; and while there were some verbal misunderstanding on both sides, the matter has been settled and resolved after further on-site discussions from both parties. The management for both the police and fire services had also communicated with each other regarding the said incident, where they have come to an understanding and will respectively honour the other’s work, in continuing to cooperate with each other in the future to stop the violence and curb disorder.

In the meantime, a pro-police Facebook page titled “Salute to the Hong Kong Police” published a post very early in the morning, saying that “netizens accuse the fire-fighter who immediately went on a tirade of swearing at the police was looking to foment disunity”.

However, just who is really causing division between the police and the fire services departments? The aforementioned page in the said post also shared a letter of complaint drafted by some citizens directed at the Fire Services Department, the content of which highlighted that the fire-fighter abused the police with foul language and obstructing the cops from carrying out their duties, saying that the behaviour constitutes an “obstruction of a public officer on duty” and “breach of peace” and asked if the Fire Services Department can accept such actions. The letter also asked, “Didn’t the fire-fighter had access to respirators? Doesn’t he know how to use his equipment? Is he able to continue carrying out his duty as a fire-fighter? Won’t the Department re-assess this fire-fighter’s ability to do his work on the frontline?”

The said letter of complaint also demanded that the Fire Services Department strictly adhere to the various current codes of conduct for civil services management, and to take disciplinary action against “this irresponsible act and language”.


(Translator’s note: images here are screen-cap of the subject of this article) 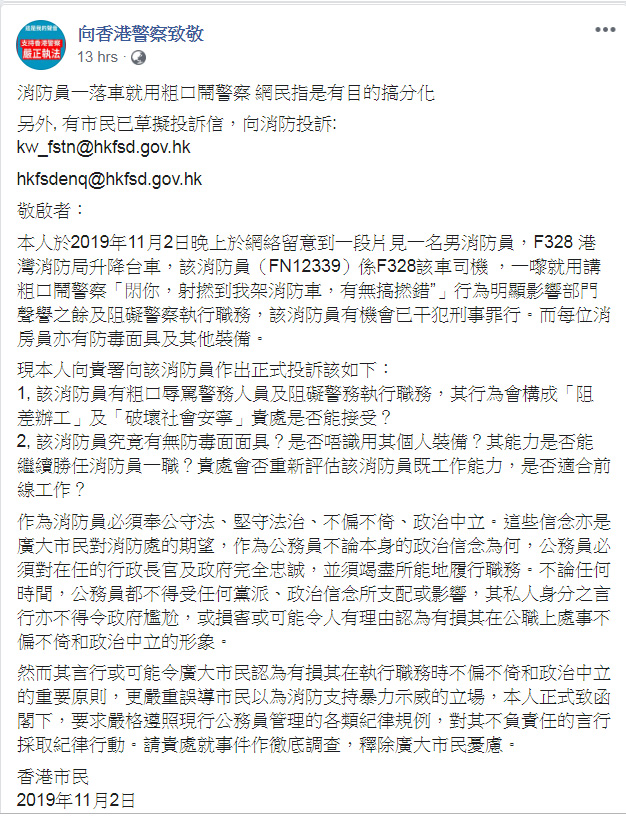