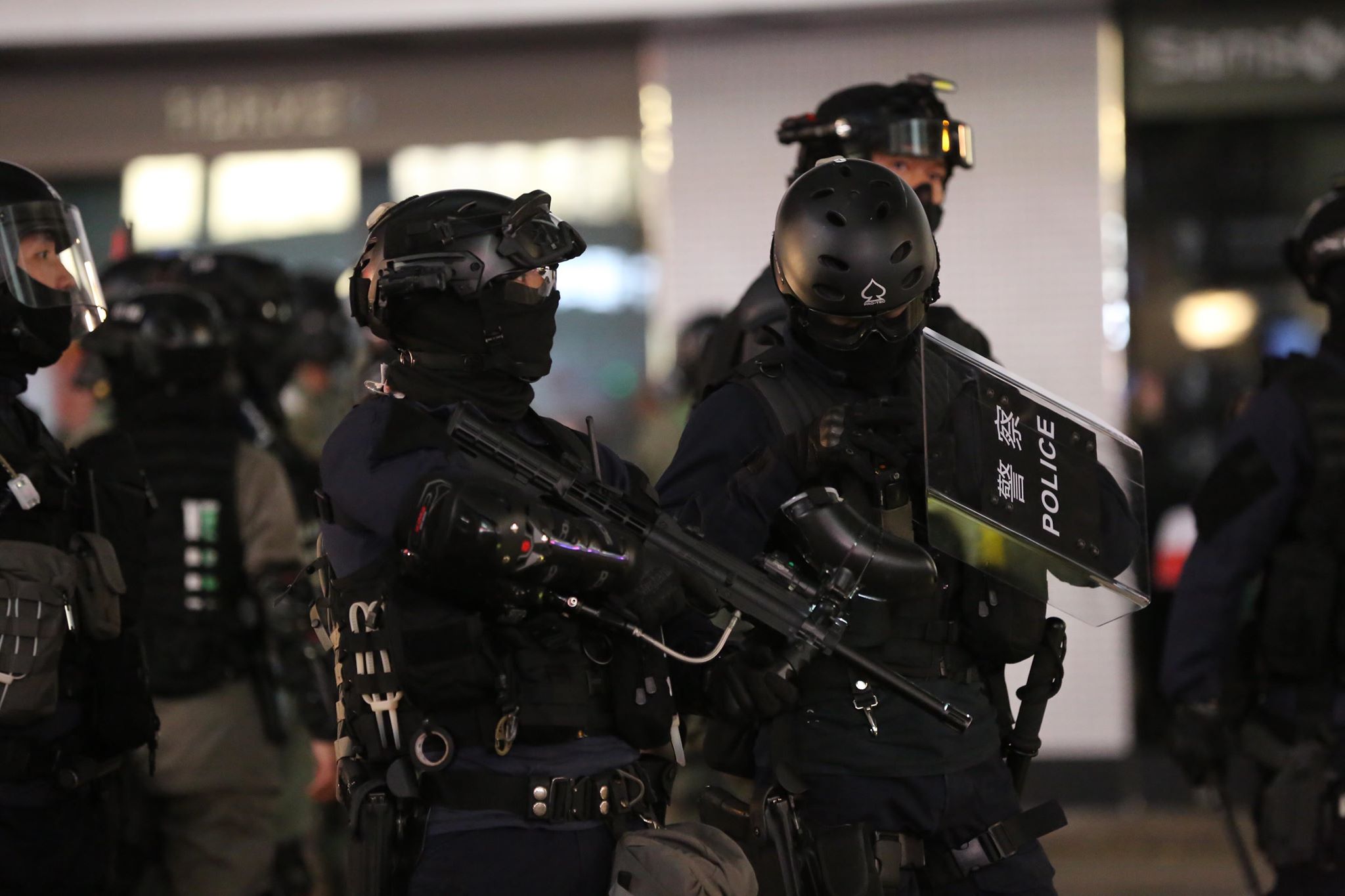 I suggest that from now on the word “police” be scrapped from official vocabulary and within Chinese society at large, replacing it with the word “yamen runner”, or more eloquently as “yamen bailiff”, as this is a cultural reformation that would be more profound than the inquiry into police criminal violations which would come after Hong Kong attaining universal suffrage. The word “police” and its derivatives are toxic to the people’s consciousness, generate a submissive mindset and fascist despotism, and must be abolished.

The institution of a police force was introduced from the West during the end of the Qing era. At the time when foreign powers were building railways in China, Liang Qichao worried that they would also import police to place the Chinese people under surveillance. In 1901, Liang in his essay “On New Methods of Conquest” wrote: “Policeman as a necessity of government was not but now is, should it not be something to rejoice?  To have this formerly non-existent power placed into the hands of another, namely an obstinate government, it does little for good governance but much to frustrate public morale. Russian police in Poland were once the most thorough but was it a blessing for Poland, or a curse? The police in current day Russia ranks number one in the world in terms of severity, great at helping the Russian government deal with domestic criminals, but the people of Russia groan under such an authoritarian state, in an abyss from which there is no return. With the Russian people shackled in perpetuity, has the Russian government fared any better? Now imagine how it would be for countries that are way behind Russia in terms of having a strict legal code and a clear boundary in sovereignty. So if we are to have the police put China’s affairs to order, it would be like putting a sharp blade into the hands of bandits.” Even Liang Qichao back during the Qing Era had warned of institutionalising a police force.


Understanding the true meaning of “police”


The word “police” first appeared during the later years of Guangxu Emperor’s reign, copied over from the Japanese language. The word “police” (jingcha), in traditional Chinese language, carried the meaning of cautioning and supervision; when coupled with the sense of a senior official out inspecting the country, the word suggests an air of authoritative haughtiness. In actuality, this word was first used to mean divine supervision. The monk Xuanzang during the Tang era, in the chapter on the state of Ramgram from his work, The Great Tang Records on the Western Regions, wrote of a certain place being plagued by wild elephants, so spiritual intervention was sought to drive them away: “herd of wild elephants roamed, grazing on flowers as they went; even with spiritual intercession, initially affected no change”. This usage of the word stretched all the way to the Qing dynastic era; in the Qing era novel, The Unloosened Belt Collection (Bu Xia Dai Bian), the author Jing Zhi wrote: “A measure of power, a measure of sin committed, not necessarily by one’s own hand but by the hands of many in one’s stead! When the Guru Rinpoche comes with the rod and a shout, how can the initiate not be constantly on guard?”

After the Tang Period, the word “police” came to mean stratocratic governance, which was harsh and severe, as if every act is blameworthy. In the Biography of Shi Hongzhao, from the New History of the Five Dynasties, it is written: “Hongzhao dispatched troops out for patrol, tasked with dispensing execution for every single crime, no matter how minor or trivial. In the Biography of Lu Ying, from the Book of Southern Tang written by Lu You during the Song Dynasty, it reads: “the Lord of the House tasked Han Deba with being the superintendent of the capital’s signal towers, who was extremely zealous”.

By the time of the Song Dynasty, the word “police” became internalised, whereby the word came to mean being self-vigilance and introspective. In the Miscellaneous Records of the Year 1104, written by Wang Gong during the Song Period, it reads: “Zhao Qingxian would burn incense inside the courtyard in the middle of the night every night, during which he would offer his prayer to heaven, talking about what he had said and done that entire day from dawn until dusk, as well as conversations he had with others and his petitions to his superiors. When asked why, he would respond in saying: ‘How can I petition the lord of heaven with a straight face if I lie to myself? I’m doing this for self-reflection and to be self-vigilant.’” During the Ming period, in the Appendix to the Topic of Master Hui’An’s Correspondence and Calligraphy, Chen Jingzong wrote: “although everyone knows that Master Hui’An has reached the realm of a great sage, yet he still finds the means to cultivate his self-vigilance.”

From what one can see in the traditional meanings of the word, “police” carries not only the authority of spiritual supervision, or the severity of a stratocracy, but also the harshness of one’s inner restraints.  How inapt has the word “police” been used by the police states in recent Huaxia (Cultural China) history. And yet, should we allow the abuse of the word to continue?

The functions of the modern day police in traditional Chinese is yamen runner, yamen bailiff and bailiff runner. Those who are stationed in a yamen are known as yamen runners or yamen bailiffs, while those who go out to catch criminals are known as patrolmen, chief constable and constables. Up until the eighties last century, Hong Kongers would still refer to the police as “bailiff”, “patrolmen” or “patrolwomen”, plainclothes police are known as “odd-job men” and police stations or the police headquarter are known as patrol-houses. Yamen runners therefore have a long history, respectably referred as “officer”, or mockingly as “runner”.

Modern usage of the word “police” is a rather new term, with neither an honorific term nor a derogatory one, as the word was borrowed over from Japanese, thus lacking in flexibility for development in the Chinese language. The term “rogue cop” (haak king, literally “black cops”) used in Hong Kong nowadays, carries the implication of being a secret police without any derogatory meaning, as it refers to those police who carry out their work anonymously and in secret. Given that the term “police” in the Chinese language endow law-enforcements with an over-the-top sense of honour and power – containing the words of “warning” and “inspecting” – thus it is easy to be subjected to abuse of power and therefore I suggest that the Chinese language henceforth should discontinue the use of the term “police. Once Hong Kong achieve full democratic autonomy or achieves statehood, the government should abandon the use of this term, using the word “constabulary” instead of “police”, or colloquially as “officer”. Just as government office workers are known as “civil servants” in this day and age, so should policemen or policewomen be known as constables.

In terms of socio-linguistics, Hong Kong citizens abandoned the traditional use of the word “constable”, instead using the new Chinese term “police”, after the HK police force cleaned up their image through cinematic entertainment while implementing anti-corruption and establishing modern administrative measures. Various new words with an air of mystery and enigma were derived from the term “police”, such as: police power, police regulations (or general orders), police academy, independent police complaints council, assaulting police, insulting police, pro-police, off-duty police, etc. It’s as if the word “to warn” is like the divine idea of “logos”, whereby it accrued in divine authority when various words are derived from it. This is the result of the apotheosis of the police force, due to the British colonial era’s emphasis on law and order rather than democracy, thereby making us being in awe of them. I do believe that from now on, we should abandon the use of terms such as “assaulting the police” and instead call it “assaulting a constable”, and police regulations be termed as constabulary regulations.

For if Hong Kongers are to continue to accept using the word “police”, then they will accept warnings and supervision of the police force, checking your personal identification, stripping you of your clothing, taking a photo of you and monitoring your social credit. Once Hong Kong is democratised, I believe that the term “police” must be abolished, replacing it instead with “constable” or “officer”, “police station” with “constabulary”, “police headquarters” with “constabulary headquarters”. Should I have the chance to form government in the future, or engage in research, I would culturally sort out Hong Kong’s traditions, so as to recreate a modern, open Hong Kong yet follows the elegance that is the cultural China.

(Editor’s note: this article was published on the 74th printed issue of Passion Times. The subscription link for the printed version of Passion Times is: http://www.passiontimes.hk/4.0/regform.php )