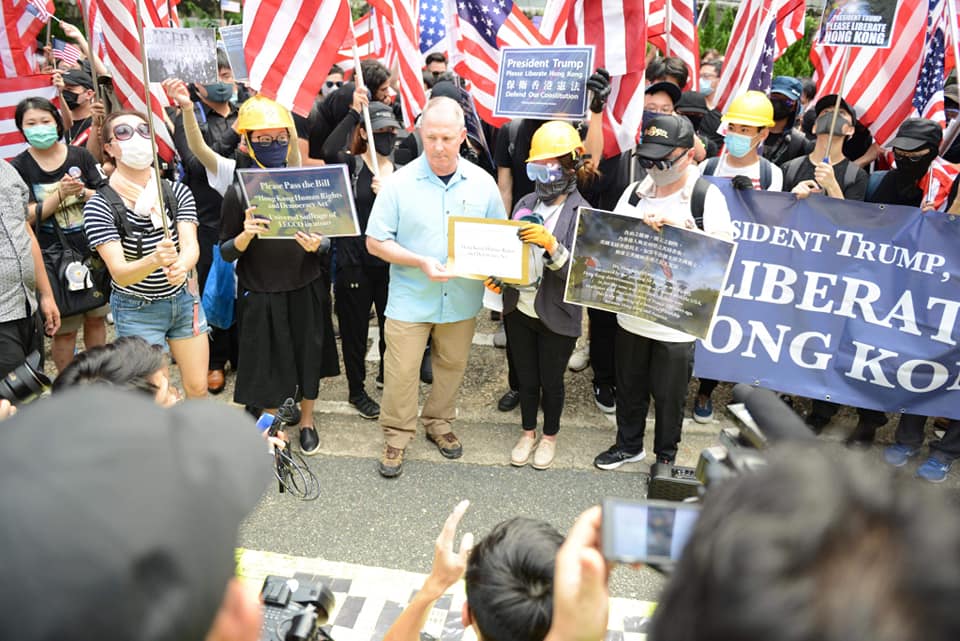 There is precedence as well as levels in setting up Hong Kong’s place within international state of affairs. Many people are jealous of Wan Chin’s stratagems so time and again, one after another, they sought to grab the agenda, such as going to Britain to lobby for equal rights for BNO holders or taking the case to the United Nations; which are all so foolish. If they had me figured out so easily, then they wouldn’t have had the need to slander me as insane behind my back!

While China is the one interfering with Hong Kong, it is the United States dominating the situation and only the Americans have the power to protect Hong Kong and deal with communist China. Since America is the nexus of Hong Kong–China politics, therefore Hong Kongers must look to the Americans for assistance and to directly ask President Trump for help at that, since it is his mission to alter America’s relations with China. American presidents in the past have supported a joint venture with the communist regime to exploit China and Hong Kong, but Trump wants to rock the boat by shaking up plans for the deep-state’s plan for the U.S. and China, and since Trump has already set it in motion, Hong Kongers should also jump at the first opportunity to ask for his help! In 2017 I had published my book, Trump’s Thick Black Theory, in support of the man – and along with my two years of establishing a rhetorical setting for a comprehensive support for Trump’s international political agenda – it is therefore nature that his aides and advisors would know of this.

Once Trump has found his footing again after surviving the call for impeachment by Congress, he would therefore turn his attention back to the trade issues with China, and when he has enough room for manoeuvre whilst managing the China trade concern, he would also deal with the Hong Kong problem. This window of opportunity came in May this year, when Xi Jinping suddenly overturned the 150-paged agreement that Liu He, China’s representative for trade talks with the U.S., had negotiated with the United States (it was the Politiburo Standing Committee that had it overturned in the dead of the night, probably as a snare they’d set up for Xi Jinping), after which was the G20 Osaka Summit. I urged my compatriots to go raise the American flag during the Summit and sought President Trump’s help for all the world to see in order to seize this golden opportunity. It was the once in a lifetime opportunity, a crucial moment, and in order to seize on this sort of moment, you must have spent decades in studying politics and the Book of Changes (I Ching).

The outcome was an unprecedented success. Trump in addressing the international community at the United Nations General Assembly in New York on the 24th September, said how China chooses to handle the situation in Hong Kong would a source of reference for the rest of the world and China must agree to do so properly in order to continue with its trade talks with America. Maybe it’s not well-known but I am the one of the few within the ethnic Chinese community, perhaps even amongst all the political commentators around the world, who had written a book to praise Donald Trump during his presidential election campaign and even entrusted the American Consulate to send a copy into Trump’s hands itself. This was not a gamble but a delegation: to entrust Hong Kong’s fate to an outstanding American statesman.

On the 9th of September this year, a trio from the Hong Kong Higher Institutions International Affairs Delegation went to London to attend a conference hosted by the human rights organisation Hong Kong Watch; during which, they exchanged communications with several members of the British Parliament, raising the issue of equal rights for BNO (British Nationals Overseas) passport holders and a British version of the Hong Kong Human Rights and Democracy Act, both were flatly rejected by Parliament. These “pseudo-HK independence advocates” (1) tried to plagiarise my efforts but didn’t realise their bad timing. Aside from picking on little old Wan Chin and betraying their mentors, these juveniles can do nothing as they are lacking in both experience and ethics. 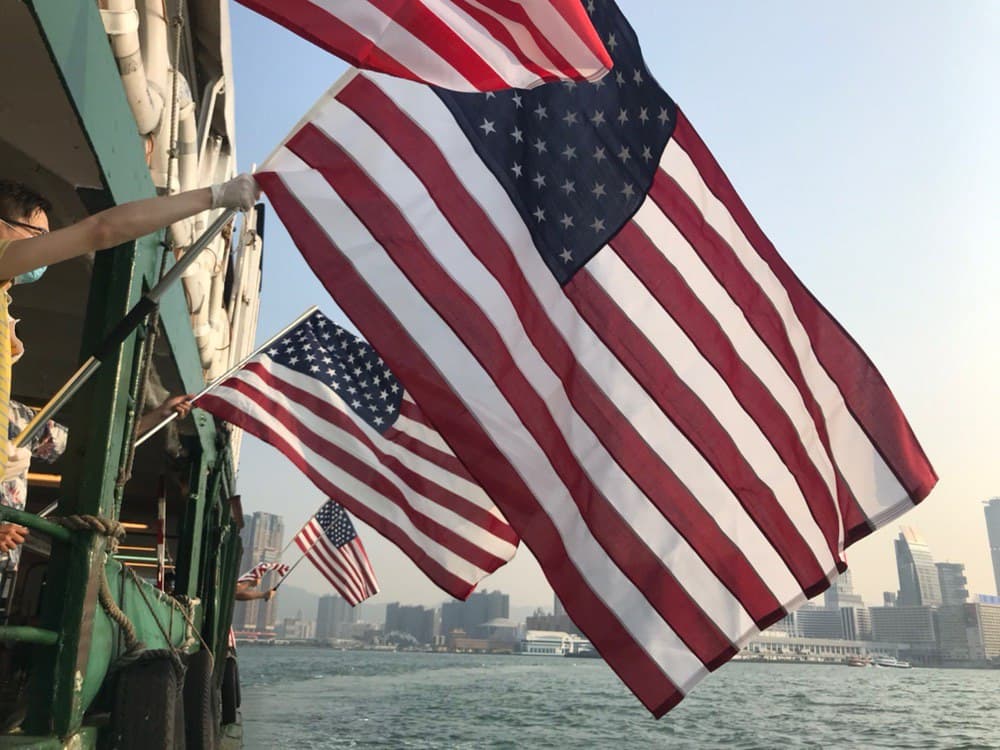 British Prime Minister Boris Johnson met with President Trump during the 73rd United Nations Assembly on the 24th of September. In an earlier meeting with the Ukrainian President, Trump had coerced his counterpart to spill on Democratic Party’s presidential candidate and former vice-president, Joe Biden, for which the U.S. House of Representatives launched an impeachment inquiry against him. On the same day, the U.K. Supreme Court ruled that Prime Minister Johnson was unlawful in advising Her Majesty to prorogue Parliament for five weeks and the decision was therefore null and of no effect. President Trump aided the British Prime Minister in planning out Brexit, as well as telling Johnson face-to-face that he shouldn’t need to fear Parliament’s appraisal. On the 16th of October, Her Majesty the Queen announced that the UK will leave the European Union on the 31st that same month, while the Parliament prepared a British version of the Magnitsky Act that would economically sanction any Chinese or Hong Kong officials who have committed human rights violations. This deployment by British and Americans is about returning London as a financial center back in the hands of the English-speaking world and both signed a bilateral trade agreement with one another. Hong Kong as a financial center naturally would also return to the English-speaking world; and finally, the three major trade centers of the world will be in the hands of the British and Americans.

Only afterwards would both join forces in dealing with the Hong Kong issue, with Britain citing the Sino-British Joint Declaration in order to raise the issue, extending Britain’s period of oversight from 50 years to an additional 50 or 99 years, thereby providing Hong Kong with sufficient time period of suspended sovereignty, to take advantage of the fall of the Chinese regime for the best opportunity to reinstate Hong Kong as a sovereign state.

Why do the Americans want autonomy for Hong Kong but not independence? An independent Hong Kong will deny Hong Kongers their prosperity, which is something everyone must realise!  Why then do the communist party have these nobodies and brats in Hong Kong recklessly calling for independence?

President Trump, in having forced China to open up their financial market and service industry through the use of trade tariffs, would need Hong Kong as a base to help him enter China, thus would require Hong Kong to maintain its autonomy as well as agreements associated with it, such as CEPA and the Pearl River Delta framework. Once Hong Kong realises universal suffrage, a legitimate, home-grown Hong Kong government would emerge that America can control, and agreements previously signed between Hong Kong and China can now be exercised according to the benefits and interests of the Hong Kong government.  Once this comes to pass, China would not be able to interfere in Hong Kong even if it is the suzerain in name, but it would facilitate Hong Kong entering into China under the premise of “one country, two systems”. This is a great opportunity that the Taiwanese could only dream of!

The “one country, two systems” principle, once a reluctant agreement to retake Hong Kong, now a stratagem for Britain and the United States to insert themselves into China, has been part of the Deep State’s machinations these past decades – from when Deng Xiaoping proposed it, to Britain signing the treaty in 1984 and when the United States enacted the “Hong Kong Policy Act” in 1992 for the purpose of oversight. This is the way that Hong Kongers will be able to strike it rich – not only are we are able to achieve democracy, acquire opportunities in commercial and industrial developments, but we would once again be idolised by the people in mainland China. The “one country, two systems” would grant Hong Kong easy access to China, perhaps even procuring several provincials as territorial concessions for us to manage. With the financial prowess and management abilities of both Hong Kong and the United States, it is possible for Hong Kong to establish territorial concessions in major Chinese cities (such as Shenyang, Tianjin, Wuhan, Shanghai, Canton, Chengdu, etc.) – Macau’s Hengqin is a model for such territorial concessions.

What is Hong Kong independence then about? It provides the Chinese communists with an opportunity to frustrate America’s plan for a Bill of Rights in Hong Kong, and for the Hong Kong yamen to be endued with absolute power for suppression, such as allowing off-duty cops to carry police batons and pepper-sprays. The “One Country, Two Systems” Principle and autonomy, with the United States to monitor its implementation, is most advantageous for Hong Kong. In chapter two, section nine of my book, On the Hong Kong City-State, published in 2011, I had announced in advance that the United States will make their move to protect Hong Kong, when the “one country, two systems” regime reaches its critical point of being corroded by the Chinese communists, for which afterwards Hong Kong will become the bridgehead for entering the China market and to influence Chinese politics.